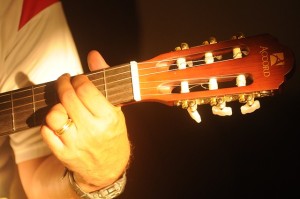 The guitar is one of those instruments where it is quite possible to make continued good progress as a beginner. Many of the techniques beginners use are just the same as advanced players, although more experienced musicians tend to add to their repertoire of skills over the years. However, all guitar novices can benefit from tips which will allow them to play better and to progress to the ‘next level’ much more rapidly. If you are just starting out with learning to play the guitar, then consider all of the following advice the next time you pick your instrument up.

Work on Strumming Patterns
Quite often new guitarists concentrate on one hand over the other. This usually means that right-handed players, for example, look at their left hand on the fretboard at the expense of their rhythm-making hand. Remember that skillful guitar playing relies on both hands working in tandem. Make yourself look away from the chord shapes and fingering your non-dominant hand makes and focus on the other one. For beginners, this means working on upstrokes as well as downward ones to create new rhythmic patterns. Try strumming along to reggae songs to improve your offbeats and upstrokes, usually a weakness in beginners.

Learn Scales
Do you know the difference between a major and minor scale? Can you tell a chromatic scale from a bluesy one? Not all guitarists – even very good ones – do. However, a little theory with scales goes a long way to turning you from a run-of-the-mill rhythm guitarist into a lead musician. Taking a solo is so much more than stamping on an overdrive pedal and thrashing around. Practice scales but don’t just plod on, doh-reh-me. Add little licks and rhythmic steps to your scale runs as preparation for a blistering solo. In short, learning scales with a few tricks on the way will prepare you for improvisational play.

Switch Guitars
If you always play on an electric guitar and never on an acoustic, or vice versa, then you may find that your playing style becomes very narrow. This is fine if you know exactly what sort of guitarist you want to be. However, for most of us, our playing style will naturally change with differing instruments, so don’t always play on the same one, if possible. Swap for a while with a friend if you don’t have access to another guitar. Different guitars have different feels, usually down to the action – the gap between the string and the fretboard – and their body – solid or acoustic. With the change of feel, so your playing will adapt and your musicianship can improve in terms of subtlety and variation of style, as a result. If you don’t have access to anything other than one guitar, then try using it in different tonal environments. For example, try playing whilst seated on a bed, for a very acoustically dead response. Alternatively, stand up in the bathroom facing a tiled wall for a very bright response.

Avoid Bad Habits
Many novices get into bad playing habits without realizing it. This could be that they form a barred chord without a strong index finger position, for example. Alternatively, it could be that their plectrum grip is all wrong. The trouble is that these things are harder to unlearn than to pick up in the first place. As such, online tutorials can be invaluable and help you to focus on things like your stance or thumb position, when stretching for hard to reach fret positions. By ironing out these bad habits early with online guitar lessons, you may find that there are less plateaus in your learning because problem areas, which prevent ongoing progress, are rarer.

Work on Chord Transitions
When switching between open chords, try and think about how you can anchor your hand to move smoothly. For example, when playing a D-major chord and you want to progress to a G-major chord your ring finger can stay on the third fret of the B-string for both. Without having to look at your hand, this means you can use the anchor to find the new finger locations needed much more easily than completely releasing the position previously held. All sorts of chord combinations have anchor points like this, especially harmonically-related ones, like A-minor and C-major for instance.

When learning the guitar, don’t forget to have fun. It should not be a case of repetitive drill, but of taking enjoyment in the progress made. Sometimes you may think that you are making no headway at all. At such times, try recording yourself on a mobile phone or similar. When you next think that you have made little progress, listen back to the recording and you may well find that you have indeed improved. Ultimately, playing should be about personal enjoyment. It is a question of making music, after all.
Ready to try some free online guitar lessons? Sign up at Guitar Tricks to get started.