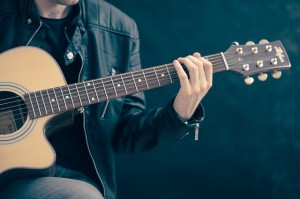 One of the great things about being a beginner on the guitar is that you have yet to develop any style so far. Perhaps you will turn into a blues guitarist and learn lots of licks to embellish the basic chord and strum technique. Perhaps you will use lots of slide and twang to get a country sound to your playing. Alternatively, you might go for power chords using an overdrive pedal and an amp for a rock guitar style. However, before you develop to this stage, you need to know the fundamentals so that you have the core skills necessary to progress. Sites like Guitar Tricks can help novices to develop these skills and to make headway with their chosen style. Along with this, one of the best ways of building confidence is to learn to play songs you already know. Better than simply changing between chords in a series of dry exercises, learning easy beginner guitar songs helps you to acquire finger skills in a fun way which means you make progress every practice session. It helps if you can sing a bit, too, but this is not essential so long as you can hear the melody in your head. Once you are up to speed with a song, you can always play along with a recording of it, anyway.

Before embarking on learning a few basic songs, it is worth remembering that two or three chords are the mainstay of many highly successful tracks. Just because a song has a relatively simple harmony structure of only a few repetitive chords does not mean that it is a basic song – far from it. Often, it is the way songwriters get something new from tried and tested song structures that marks them apart. Easy songs to learn on the guitar can sound very professional with a bit of practice, so don’t be put off because the songs on this list don’t seem sophisticated at first glance. Quite the reverse is often the case!